Hundreds of Baby Sea Turtles Being Released Every Week

More Fun things to do in Todos Santos and El Pescadero! 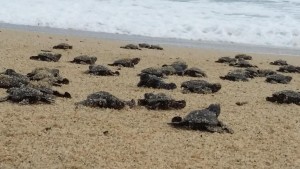 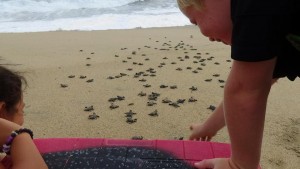 Every week hundreds of baby sea turtles are being released fromsanctuaries located on the local beaches in Todos Santos and El Pescadero.  The two sea turtle sanctuaries in Todos Santos are located on the beach in La Cachora and at La Posa.  There is also a third in El Pescadero located on the beach, just North of Rancho Pescadero.  These sanctuaries are visible by the chain link fencing that protect the nesting sea turtle eggs from poachers and animals.  The releases are scheduled daily at 6:30 pm in El Pescadero, according to Griselda Lorena Sotelo Amaya, who is in charge of the release at El Pescadero and works as a volunteer for the non-profit release program.  Griselda reported the species of turtles hatching now are Golfina and Prieta, while the Luad, or leaterbacks, will be seen and released from November thru February.  More questions concerning details of the release can be directed to     https://www.facebook.com/GrupoTortugueroPescaderoAc

Here’s a video of a recent sea turtle release at Playa Pescadero!